The common name for this plant is “Russian” goats beard or “Korean” goats beard, either way its a lovely plant which grows 3 to 4 foot tall with broad fern-like leaves and large white fluffy plumes. These plumes are made up of many tiny starry flowers and bloom for many weeks through June and July. Its a very adaptable and hardy plant, we have it in several positions in the nursery garden from full sun through to full shade. After several weeks of flowering the plumes deepen in colour through cream to a biscuity shade. 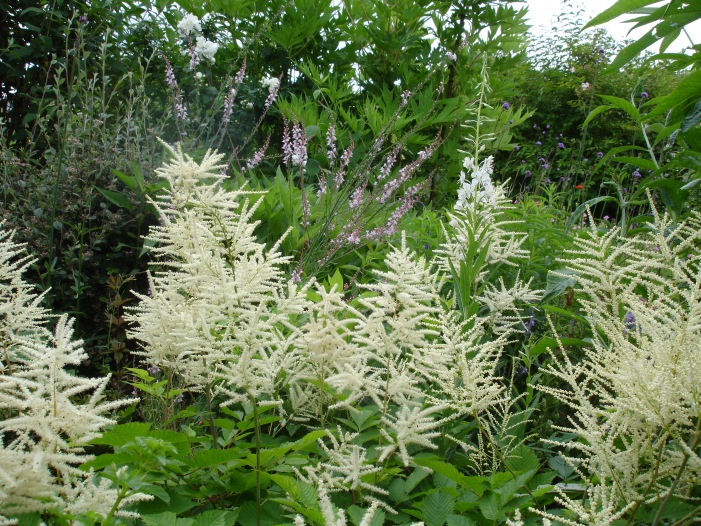 This is a “must have” plant for any garden. It grows almost anywhere, flowers for ages and will seed itself happily around in places you couldn’t get it to grow if you tried!

Campanula poscharskyana is one of the lower growing members of the Campanula family however if it is growing by a wall it will lean its shoots up against the wall most effectively.Generally its about 6″ to 8″ tall and has mid blue bell-shaped flowers for many weeks in the early to mid summer. After flowering tidy up by just pulling out the long arms and then in a few weeks you’ll get a second flush of flowers. Bees and hover flies adore it, as I say , a “must have” plant! 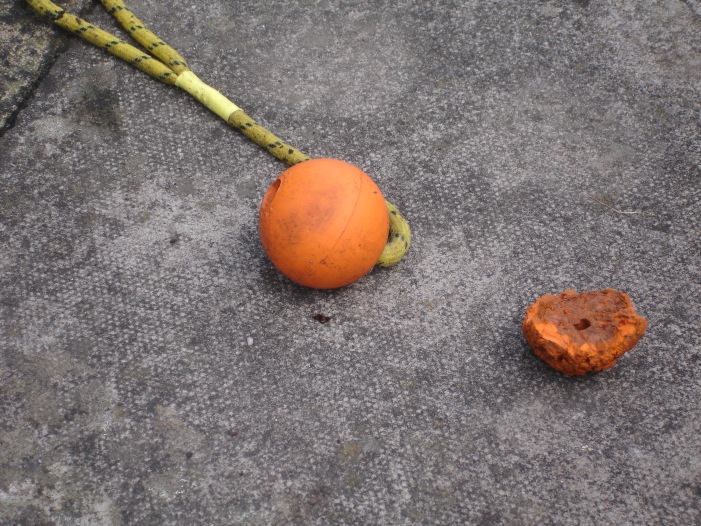 I am always amazed at the number of times I have to throw her favourite ball for Maisie. I say ‘ball’ but believe me, there’s not one of you reading this who would recognise it as such. Why?

Well, first of all, it has been ‘customised’ for Maisie by her faithful friend, Sophy. When Sophy gets her paws on it, she likes to nibble it. However, being a Staffie, nibbling is pretty destructive and chunks of red rubber lie in drifts around her as Maisie waits patiently for something – anything – to distract Sophy, which it usually does.

So Maisie’s favourite ball is (putting it generously!) a slightly curved piece of red rubber about 3 inches long by 2 inches wide. It’s not in the slightest bit aerodynamic and takes an enormous heave just to get it to fly a few feet, although I am mastering a bit of a back-handed flick that’s not too bad..

Liz does feel rather guilty on behalf of her dog for the state of Maisie’s beloved, and bought her a new, with-string, rubber ball for her birthday in May,(the one on the left, in case you were in any doubt!!) but Maisie, with her trade-mark single-mindedness, has steadfastly ignored this new up-start. However, Sophy hasn’t. So, occasionally, Sophy will lie with the new ball between her paws and gently nibble at it. I’m hoping that, when it’s lost it’s string and most of it’s sphere, Maisie will decide it will do, because her favourite can’t last much longer. Two more sessions of Sophy nibbles and it will be gone!

(I watched my two dearest girls  with new awareness of how much they mean to me yesterday as I heard that one of their little JR friends, with whom we have shared many a ramble over the years, was run over and killed by a hit-and-run driver on her walk. R.I.P.Jenny.)

A deciduous, robust and reliable perennial which produces lush light green foliage in spring and in June to August has spikes of white pea-like flowers with a coconut scent.

Easy to grow in almost any garden soil, it prefers full sun but will grow happily in light shade. AGM 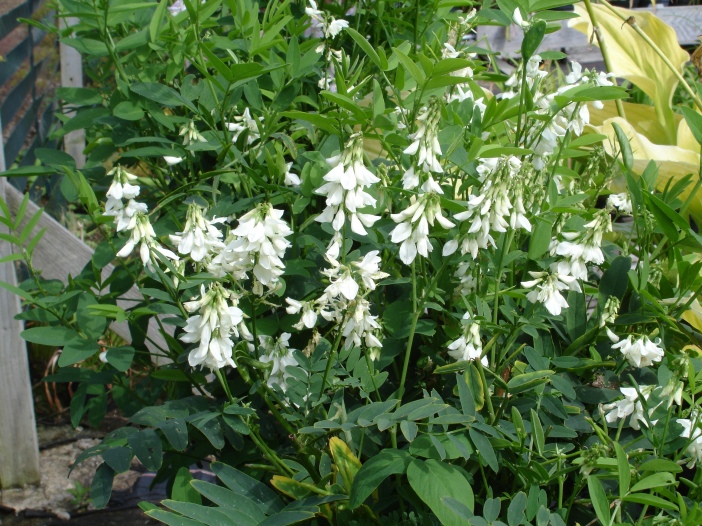 This week its three for one! This photograph taken in my garden showcases three easy perennials, Centaurea montana,Geranium himaleyense and Valeriana pyrenaica all good “doers” and free flowering. The centaure and Geranium will repeat flower if cut back after the first blooming. 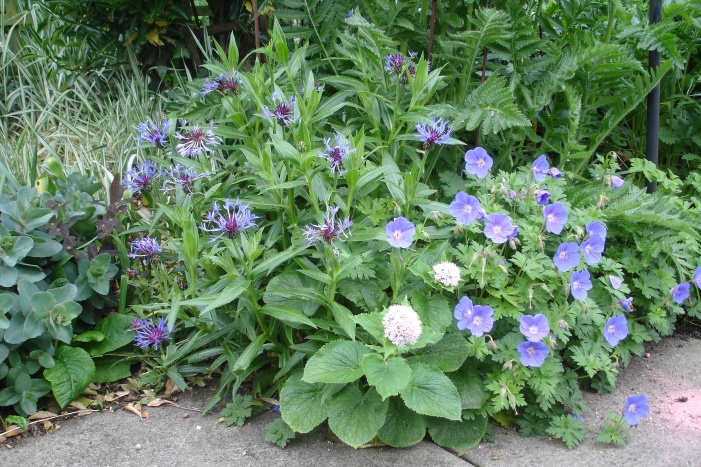 At last!! The first Hemerocallis of 2016 to bloom in the nursery gardens is Hemerocallis “Canary Wings”. It is an Spider variety, 38″ tall, large (6″ to 8″) glazed lemon yellow flowers  with a faint halo. I obtained this from Duncan Skene of Abraxas gardens (now sadly closed) several years ago & I hope to be able to propagate it for next season. It’s a lovely plant and one that is not readily available in the UK.

Hopefully this will be the start of the 2016 daylily season and I will be able to share pictures  of my favourite varieties as well as post photos of some of my new seedlings many of whom are already in bud!! 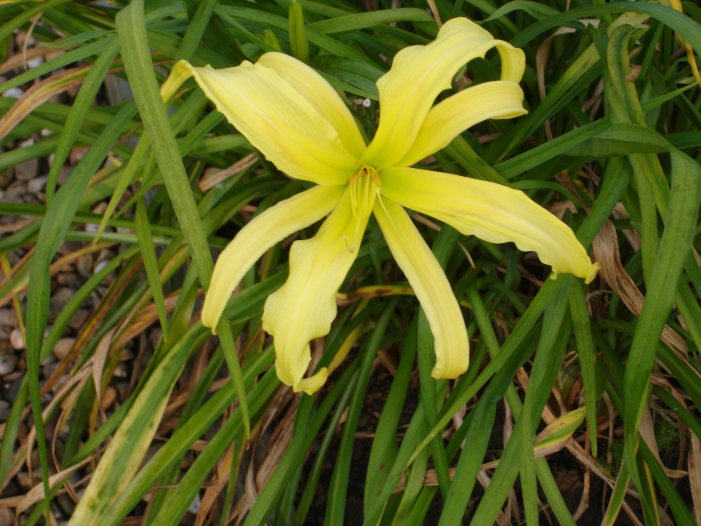 This Monday sees the start of a new event for the National Garden Scheme, at least here in Worcestershire. We are holding a morning open garden! I know right now, in the early morning rain, it doesn’t sound too inviting, but HEY it’s going to be better weather by next week.

It will be the usual – a stroll around our ‘hidden gem’ (not my quote) of a garden – followed by our own home-made cakes with tea/coffee and a friendly chat with, maybe, the purchase of some plant you’ve just decided you can’t live without, (yes, folks, we’ve all been there!) sitting either on the sunny patio or cosied up in our especially cleaned polytunnel, if wet. And all in the morning!! From 10.30am till 12.30pm if you’re interested.

Of course, we are still doing our usual Sunday openings: the 5th and 19th 0f June from 2pm till 5pm. And there’s a second coffee morning on the 20th June if you miss next week’s. This is just a dip – no, just a toe in the water, so to speak, to see if anyone is interested in a morning visit. It’s something we might do, as we, theoretically, are retired!

Whether it be morning or afternoon, hope to see you soon!